Dream Blogging – Caring for the Totems

As noted in my recent blog about dreaming – the Self is often represented by animals and appears when some kind of order is being restored within ourselves. I had this dream early in the week and it featured three animals. The main theme is providing sustenance and care for the animals – therefore my Self.

I was walking through the bush (not really a forest) and the conditions were similar to a drought. The first animal I saw was an alligator – running down a dirt wall – or maybe the banks of a dry river. I wasn’t afraid but it was rushing at me and I felt like I needed to provide food and water for it – due to the drought. I walked on and saw a dry river – with only a muddy puddle and a little water. 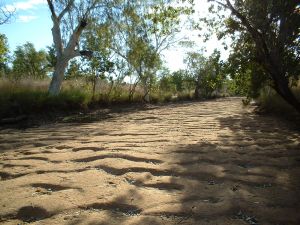 Somehow I knew that there would be rain or water soon and that there was a lake filled with water somewhere close. As I tried to locate it, I saw the alligator going in the direction of the lake and felt somewhat relieved.

Then I saw a brown horse – a little thinner that it should have been. (In Chinese Astrology – my sign is the Horse – element: fire. This represents an impetuous nature – strong and capable – but sometimes willful and passionate. Definitely me!) I felt sorrow over it’s condition and called it over to me.

It came over and followed me to a field of wheat. I sat down and it lay its head in my lap as I fed it grasses and wheat. I was happy to feel the energy coming from the horse – as there was such a need for it to get well. (There was a lot of emotion at this point.)

Then I went on into a dense part of the bush – where it was almost a forest – and it was dark. I found a huge tree that was also like a tall row of cupboards (inside – it was hollow and dry). There was a cute little chipmunk on one of the shelves higher up and it scampered down to my hands.

It was so tiny and adorable and I felt a rush of love for it. When I looked around – I could see that it had been gathering food for itself – but still felt that I needed to take care of it.

THEMES: Taking care of the Self

INTERPRETATION: As mentioned earlier – the theme was about healing and taking care of the Self. I have been concerned with my own health lately and have been eating whole foods and trying to stay away from junk, etc. (I have also started taking multi-vitamins and have noticed great improvement in my general health as well as some weight loss.)

First – the alligator as a totem can represent the mother or mothering nature within. The alligator can be ferocious and attacks with vigor – runs fast on land and is deadly in the water – stalking with great levels of stealth. When they take their prey, they tumble and twist under water – doing the death roll – in order to either stun or kill it. Then they stash their meal in an underwater larder.

The alligator guards the borders between water and land and can be both hostile and gentle. They represent primordial energies, survival, power and wisdom. The fact that I needed to find it water might show that my own habitat – and my body – need water. (It’s funny – we are having plumbing problems this week!) My energy levels have been getting better but I sense that this dream is telling me to step it up. The alligator going off to find the lake shows that I’m able to take care of myself and that I’m resourceful.)

The Horse – as mentioned – is my main totem and symbolizes power (in the dream it was somewhat depleted), impatience (very true for me!), transforming wounds into wisdom, sexuality, stamina and freedom. Horses live in groups – so it could indicate that I need to take care of the group/family as well as myself. (Trying the best I can!) The fact that I was feeding and nurturing it – then feeling its strength coming back – shows that again, I’m on the right track.

The chipmunk was probably a symbol of the child in me – taking care of itself (as I had to do when growing up) – but still needing attention. The chipmunk represents agility and mobility, youthful energy, scattered energies (true for me lately!), hoarding, organization. I feel that the chipmunk was letting me know that it was ok – but I felt that I still needed to keep an eye on it.

SUMMARY: Pretty self-explanatory – taking care of myself and others. The Self has been revealed and has advised that I need to continue living healthily – physically and spiritually. Restoration, organization, using my power wisely and living an authentic life are the key messages here.