My Books For Free!

From Fantasy to Romance to Erotica –

get all my books Free (Kindle Editions) for a limited time! 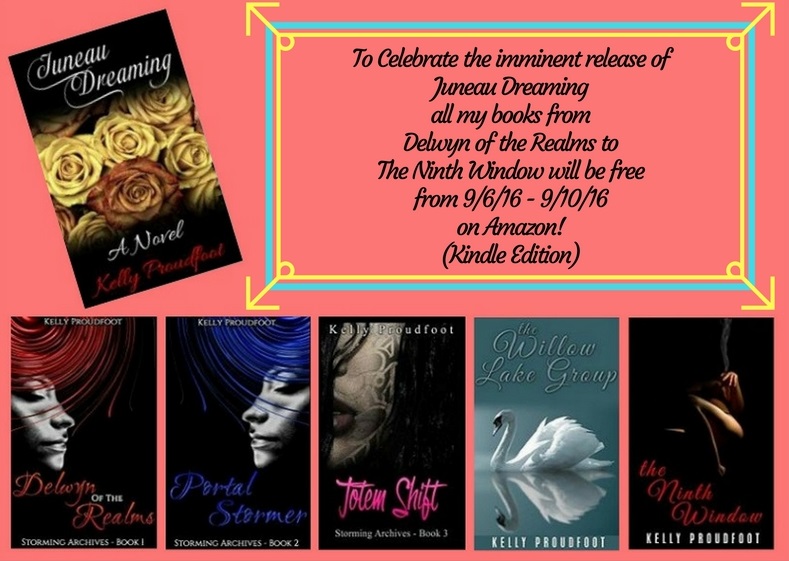 My new contemporary romance – Juneau Dreaming – will be out very, very soon!
(I know we’re not allowed to use the word “very” but I don’t like being told what to do, so – there’s that!)

Stay tuned for news about the release of Juneau Dreaming. It’s a novel about a young woman called Lilith, who loses her parents in a freak accident and decides to pack up and relocate to Juneau, Alaska.

Wanting to start afresh in a new place with a new job, she doesn’t count on having to deal with two men – essentially polar opposites – as well as her kaleidoscope of emotions that weave throughout the story.

Lilith’s dreams guide her through her new life as her grief threatens to propel her into fleeing once again. Will she overcome the tidal wave of emotions so she can settle into the wonderful community of friends and her new family?

Can she effectively choose between the reserved and moody Lachlan and the charming and earnest Stephan – or should she stay true to her initial conviction of staying single, since her fiance left her on the day of her parent’s funeral?

Juneau Dreaming is a romance filled with wonderful characters, magical imagery and a journey that leads a woman from the depths of despair to a promising life where the healing can truly begin.

A Feast in the Forest

Prepare for “A Feast in the Forest” – my cookbook for The Willow Lake Group!

(To be written from the POV of Sondra – one of the main characters!)

as well as a few magical tips from the Hedgewitch herself!

Listen to the talented Tim Campbell!

Listen to my Book! 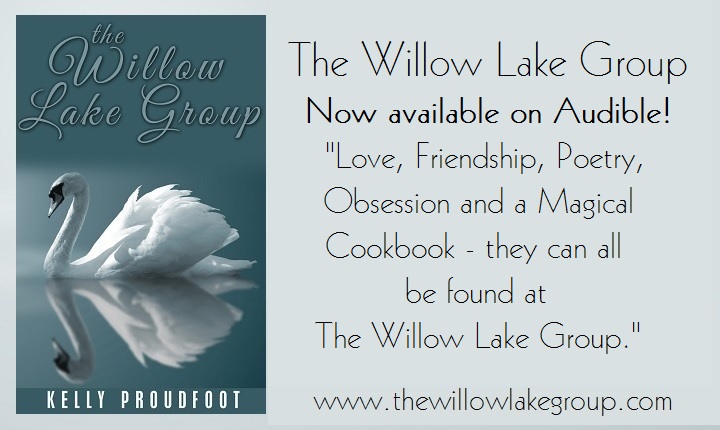 Enter for a chance to win one of 10 copies of The Willow Lake Group!

Love, Friendship, Poetry, Obsession and a Magical Cookbook – they can all be found at The Willow Lake Group.

Read about: How writing for an Older audience enhanced my creativity

The Willow Lake Group is available!

Buy it here: The Willow Lake Group at Amazon

2015 was a big year for me, in terms of finally becoming a published author – notwithstanding the fact that I am self-published. I have three of the four planned books from my Storming Archives available on Amazon (Kindle Editions and paperback), with the fourth currently being written, as well as a novel planned for release in early 2016.

I have a total of ten writing projects slated for 2016, including fiction, non-fiction, short stories, poetry and other stuff and nonsense! I’m lucky to be in a position where I can finally say that I’m a full time author – with 1/4/16 being my last day in a traditional job. I am very grateful to have a wonderfully supportive husband, who has afforded me this awesome opportunity to live the life I’ve always dreamed of.

Now, I want to advise that I do not intend to sound like I’m doing the dying swan routine, but 2015 was very much a case of trial and error in regards to navigating the world of the self-published author. As I was impatient to get my books out, I ventured into the realm of self-publishing after sending only five query letters out. (They were all very gracious in their rejection letters – stating that, whilst they enjoyed reading my synopsis and sample chapter, they felt that it wasn’t what they were looking for.)

I knew early on that my Storming Archives would present a challenge to anyone (including me) in terms of promoting and marketing, as the genre and style is a hybrid of various elements. I market the series as a fantasy, with a twist of horror, but it’s also very surreal and in the realm of consciousness.

There are many reasons for this. Firstly, the protagonist is a thirty year old woman who (like me) “suffers” from a series of mental afflictions – namely sleep paralysis, hallucinations, astral projection and vivid dreams. In “Delwyn of the Realms” (Book 1), we follow Delwyn through a mirror portal to the realm of dreams (known as Onesol). There, she has to face her Shadow in order to properly integrate – in preparation for becoming a “Portal Stormer” (Book 2).

In the second book, Delwyn escapes into the “Realms” – where she meets her fellow Portal Stormers and discovers that she has to face her Last Sorrow in the hellish realm of Nidar. After being initiated as a fully fledged Portal Stormer, she and her troops have to learn how to shapeshift, in “Totem Shift” (Book 3). This is where Delwyn and the Portal Stormers go on their ultimate mission, to secretly infiltrate the realm of animal spirits (known as Erankorun), so that they can persuade the Ural to join with the other realms. A united front is needed to face the Founders – who are coming to destroy the realms (our galaxy – known as Kendanerum).

In most cases, fantasy and science fiction stories are set in physical realms, whether past, present or future. They can also be alternate or parallel worlds, on other planets as well as earth. They are sometimes slotted into fantasy genres such as slipstream, portal, epic and so on. The bottom line is that they are actual/physical places, or at least – if they are “imaginary” or unreal – it’s an aberration and the resolution is usually dealing with hallucinations, dreams  and alternate realities.

I found it difficult to define the fact that my stories were set in the “inner” realms, which are usually mental or spiritual places considered non-physical. Sure, there have been many stories set in the dream world or imaginary places – such as hell, heaven, etc. The difference with the Storming Archives is that – on the one hand – the realms/worlds involved are usually considered imaginary, but on the other hand, they can be visited by a chosen few, in physical form.

This might not be a stretch for some people. To give you an idea, here’s my “map” of Kendanerum: 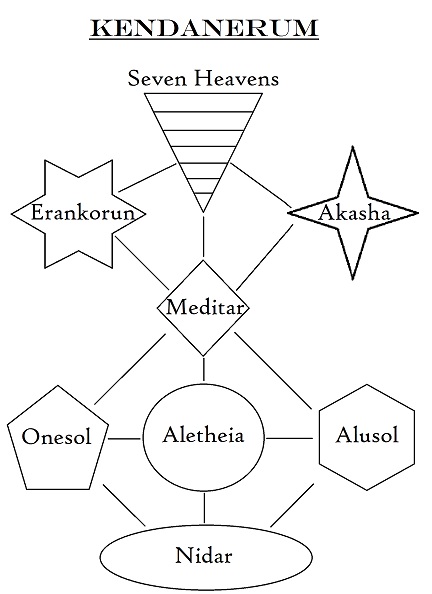 Here’s a legend or key to the realms in Kendanerum:

Only those, like Delwyn – who have the ability to traverse all realms (given her mental “afflictions”) – are allowed to visit these worlds in physical form.

I’ve drawn on my own experiences, as well as inspiration from surrealism (literature, art, music). What I’ve found quite annoying, is that the majority of novels being produced (traditional or self-published) rely heavily on the aspect of romance and/or sex when it comes to selling their stories.

Of course, we all know that sex sells, but I consider myself very altruistic when it comes to telling (and reading) a good story. What I mean by this is, I don’t feel that every bloody story has to have a romantic vein running through it. I’m probably setting myself up for ridicule – but there’s more to life than finding your soulmate or electrifying sex! I understand completely that the majority of humans are drawn to sex and romance. It’s not like I didn’t include a romantic interest – and sex – in the Storming Archives. It’s just not the main focus.

Not wanting to boast, as a side note – I have my soulmate and good sex – so I don’t have a burning desire to live out a fantasy in order to make up for something I don’t lack. Having said that, I totally enjoy good erotica and a story that involves romance, blah blah blah. It’s just frustrating to feel the need to promote my work along those lines.

I will say – that hasn’t been my only problem with getting more sales. I am a complete novice when it comes to promoting and marketing. I hate Facebook, so there’s that – but I do my best on platforms such as Twitter, Google+ and here on WordPress, to name a few.

I purchased a Snowball microphone, for the purpose of recording an audiobook. I’ve been practicing, so we’ll see how that goes. I’ve also entered a short story (unrelated to the Storming Archives) – in the Neoverse Short Story competition. Winners will be announced on 1/15/16. (Fingers crossed!)

I loathe the idea of “buying” followers, so I have that against me too. I am still learning about other formats and procedures – which I will be incorporating in my promoting and marketing plans for 2016. (Such as book blog tours, readings, more radio interviews, Youtube videos and slideshows, better advertising, etc.)

I utilize Hootsuite and Crowdfire, as well as giveaways and campaigns on Goodreads and Amazon. I also have profiles on Shelfari, Bookbuzzr, Mythic Scribes and many others I’ve probably neglected or forgotten about. It’s just so daunting, time-consuming and frustrating – to say the least. (Especially if you’re working full time and running a household, on top of that.)

I don’t mean to piss and moan. I understand that, even if traditionally published – I’d still have to do a lot of the legwork myself. The thing I’ve discovered is, it doesn’t matter if you’re using services you have to pay for (who promise the earth!) or whether they’re free. You have to find the nerve and strike while the iron’s hot.

The daunting thing (whether self-published or not) is that there are millions of other authors scrambling just like I am. It feels like being a tiny, insignificant drop in a ferocious tempest – inside an endless teapot. When I’m “spruiking” on Twitter etc – I get the image of myself clamoring over a sea of bodies. Most of us are drowning – occasionally reaching out and waving frantically – only to be absorbed by the teeming throng. (Melodramatic piss-ant that I am!)

The things I know I have to do better with include:

Having the time to organize and execute a solid marketing plan is key. After 1/4/16 I’ll have no excuse! Even though I’m doing some freelance work to make my own money (as I’m not one of those women who like to ask their husbands for a handout) – I have structured my “routine” to include time every day for my own writing.

Robert (my husband) said something totally sweet the other night, after I advised my plans re: housework, cooking and errands (just to reiterate that I would keep it all together).

He said, “I do not want you to turn your back on your creative urges just to do the dishes or laundry. If you feel the flow – let it out and focus on your writing. I’m working less hours for more money now and I’m quite happy to pick up the slack, if it means that you get to produce solid work. Do not allow the mundane to thwart your creativity!”

How’s that for romance?!