Venturing out of the Cave 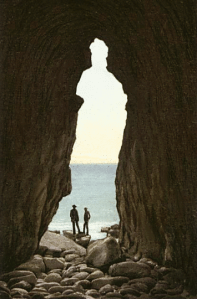 Here is a short version of a dream I had the other night – which encapsulates how I feel about marketing and promoting myself as a writer. (Even though my novel hasn’t been published yet.)

I was backstage at a rave concert, and a female – that bore a striking resemblance to a certain, twerking female singer who likes to hang her tongue out – was on stage. Wearing only a pink bikini top and Doc Martens’, she was singing and talking into a microphone – while the other hand was shoving a pink microphone up her rectum! She was shaking it around vigorously and pulling it in and out as she sang and whipped the crowd into a frenzy.

Then she turned to the D.J. and said “Tell George he has to relieve me! And don’t don’t forget to tell him to shove the mike up his butt!” Then I walked around backstage and saw a t.v. under a table, showing a tattooed woman with her back to the camera – lying on her side, reaching around and playing with her butt. I walked offstage to what seemed to be a warehouse, where someone was yelling out “There’s alcohol for sale!” Like it was a big deal. People were crowding and clamoring to see, and there were tables and displays of liquor and soda.

As soon as I woke up – I got the symbolism. For the last couple of weeks I have been earnestly working on my website and checking my Twitter account (not knowing much about either, I might add!) – trying to fit in time for my miserable Author account on Facebook and answering reviews on my profile with Book country (and therefore – altering and editing my novel.)

I have been researching literary agents and publishers, set up a profile on Mythic Scribes (which is a nice place for fantasy writers), trying to perfect my synopsis and query letters, sending PDF versions of the novel to my Beta readers and so on. I’m sure it’s all worth it. I’m sure it will all pay off. I appreciate the feedback I’m getting and the constructive criticism is helping me greatly with my rewrites. In the meantime I am working a full time job and trying to write the sequel to my novel. I am up to chapter seven – first draft – and feeling quite proud of myself.

I know I’m preaching and whining to the converted – but #*%@! I feel like a cheap, second hand spruiker! I feel like a shy, dorky wallflower in a gaudy showgirl costume that’s too big or maybe – too tight for me – and I don’t know how to wear it! I keep hearing Gypsy Rose yelling “SING OUT, KELLY!” And here I am, stumbling in skyscraper heels, trying (and failing miserably) to toss a feather boa over my slumping shoulders. “Let me – entertain you. Let me – make you – wince!”

I need a scotch!

This entry was posted on January 24, 2015 by lilithu. It was filed under Writing and was tagged with humor, marketing, novelist, promotion, writing.